A Brief History Of The Birth Of Food Moxie 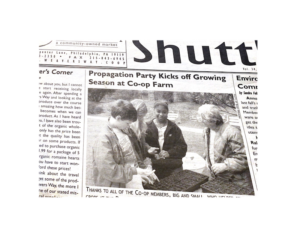 For those of you who are new to Food Moxie, Weavers Way Co-op, or have been here since pre-industrial times (like Norman), I’d like to share some history about Food Moxie’s birth. Food Moxie, aka Weavers Way Community Programs (WWCP) was formed to assist with the non-profit work to meet members’ goals, such as teaching children and adults about healthy food, understanding where food comes from, and learning gardening. When I started as the General Manager of the Coop in April 2004, I soon learned that WW staff (Margie and Stephanie) had been donating a few hours a week to run a program called Market Place with the students across the street at CW Henry School. I also learned that there was a volunteer gardening/farming program that was started by Norma Brooks and a few volunteers at Awbury Arboretum. Every spring they had a propagation party at Summit Church to plant seeds in trays with children. The children and parents would take the trays home and propagate the seeds.

Once the seedlings were ready for planting, the Weavers Way farm club would meet the kids and parents at Awbury to plant the seedlings. Back then the entire property of what is now the Awbury Agricultural Village was overgrown except for the community garden on Ardleigh Street and a small piece of land where Ken Kolodziej ran a tree farm and was working with returning citizens. Norma and her volunteers brought out classes from local schools to tend to their plants and bring home their bounty.  I realized that we needed to fund this work and decided to start a nonprofit that could accept foundation funding, individual giving, and even government grants.

Food Moxie, aka Weavers Way Community Programs (WWCP) was formed to assist with the non-profit work to meet members’ goals, such as teaching children and adults about healthy food, understanding where food comes from, and learning gardening.

I learned that the Coop had a nonprofit called Education for Alternative Economics (EAE) overseen by Coop member Professor Alan Dawley. The problem was that the charter for EAE was about teaching and educating the community on alternative economic models and not about nutrition and urban farming. Though we tried to fit WW Market Place and the Urban Gardening program into the EAE charter, it was like fitting a square peg into a round hole. WW members Adina Abramowitz, Barbara Bloom, Bonnie Hay, Bob Noble, David Pearson, Liz Werthan, Ed Rogers, and Larry Schofer were the initial board members of WWCP. They guided me with funding contacts and placed it under the umbrella of a fiscal agent, Northwest Community Services Organization (MACSC). Susan Beetle, long time WW Finance Director, was the MACSC finance staff member and also guided us with financial matters. Our first grant was from a national cooperative group in Washington DC. We requested $15,000 and received $7,500 to start our work by paying the staff time for the programs. Liz introduced me to a few of the co-op members who assisted in underwriting the Executive Director’s position and providing some operating funds for the programs.

So, 16 years and four Executive Directors later, I am happy to still be engaged with Food Moxie. How quickly the years are going by!